Is Creatine for Women?  Where is her Creatine?

Creatine Monohydrate has been extremely popular for men for many decades but what you didn’t know is that it can offer benefits to women!

Creatine for women?  But you’ll get big and bulky.

Like many things bodybuilding, there are myths and misconceptions about exericses and supplements.   Let’s set the record straight and say for men and women, there are no his and her exercises and most supplements will benefit both sexes. 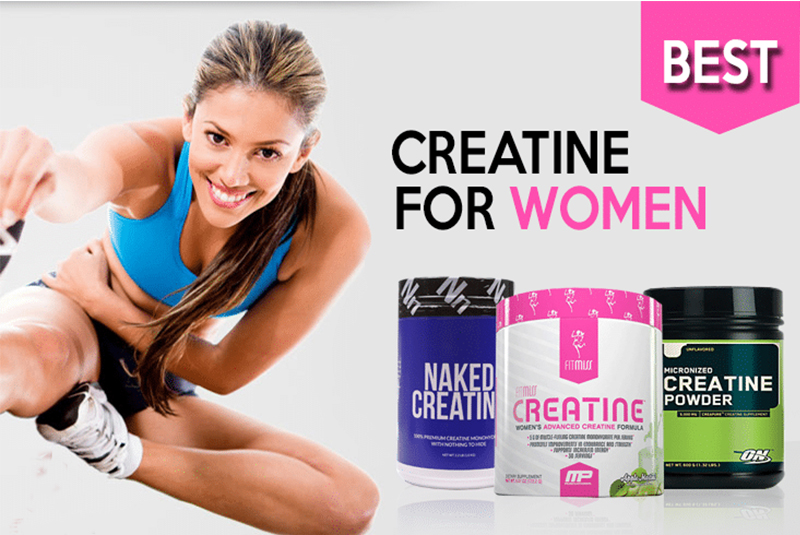 This is true of creatine monohydrate.  It’s NOT just for males.  It’s pretty much for all age groups, any gender (The NCAA won’t let colleges give it to athletes) and even for those who don’t go to the gym and lift weights.  There are no lines of his and her creatine and if there is, it’s a marketing gimmick designed to sell you a female version of something that is the same as the male.  I had to laugh when I saw this lightly colored bottle “Creatine for Women.”  The product was idential to males but it was specificially for her.

A 1999 survey of 806 NCAA Division I athletes by researchers at the University of North Carolina and published in the Clinical Journal of Sport Medicine found that 48% of men used it (compared with only 4% of women).

This may be one of those rare dietary supplements that can be beneficial even to sendentary people.  So let’s figure out what Creatine is and why creatine for women or men makes sense.  Many of the research used in creatine studies has been done on women.  Those are listed below so if you hear that all the research about creatine has been on men ,that’s not true.

In a nutshell, it’s produced in small amounts by your body, it’s found in some foods and when it’s available, your body can use it to convert to something called ATP (Adenisone TriPhosphae) that is the energy source for muscles.  The more creatine you have stored and ready, in theory and in research, you will have more availalbe short term energy for doing work and possibly just enough to do a few more repetitions than without having supplemental creatine.

That means when taking creatine, you may eke out more repetitions with the same amount of weight.

In the exercise world, Creatine helps you do more work which in turn can be beneficial to growing and maintaining more muscle.  With more muscle, you could be leaner, stronger and healthier.  It does not build muscle per se but aids with muscular energy production for better workouts which lead to more muscle.  There are some reported side effects of creatine but they are mild and in most cases, occur when you take well beyond the recommended creatine dosage or unfortunatley take low quality products.

Most women avoid creatine because they heard it causes boating,  upset stomach or unwanted weight gain.

What they don’t realize is that the weight gain can be a combination of muscle being built (a good thing and takes hard work) and water being retained in the cells.

If you mention the word water rention to most women, they want nothing to do with it.  However, it’s not the type of water retention you’d think.  It’s called cell volumization.  Creatine increases cells retention of water.  This feeling is minimal and entirely different than typical water retention caused by the “monthly bloat.”.  Being properly hydrated is a good thing.  Any water weight gained will be gone when you stop using creatine.

Men probably don’t mind the feeling of fullness, bigger muscles or a few pounds but it is totally understandable that most women are not looking for supplments that offer the remote possilbity of the aformention results.  But keep in mind that this particular effect is way overblown and very different from your typical water retention type effects.

“Weight gain of about 0.8 to 2.9 percent of body weight in the first few days of creatine supplementation occurs in about two-thirds of users.” – Christine Rosenbloom, R.D., sports dietitian for Georgia State University Athletics

Creatine for Women: What Does the Research Say

There are subtle differences between men and women when it comes to creatine supplemention.  There were some marked differences in the rate at which protein is spared or how much lean mass was gained.  This might be because males have more muscle mass to begin with higher testosterone levels and other factors.  In any case, females responded positively to creatine supplemention just like males.

Here is a very professional Creatine Overview by WebMD

Is there a Creatine for Women Only Version?

No.  But it sells so if it hasn’t been done, don’t be surprised to see it.

What is the Best Creatine Monohydarate to Use?

Just the regular powder form.  Nothing added, no sugars, no trasports, no added protein or anything else.  Companies need to create new twists on things to continue to sell and to enter new markets.  But when it comes to creatine, good plain creatine monohydrate powder that is tasteless, orderless, no color and sometimes grainy is the best.  Using creatine for women is no different from men using it.

The Verdict: Is Creatine for Women Something They Should Use?

Hopefully by now you understand a little bit more about creatine for women and why it’s actually a supplement you should consider.  Do not be swayed by the myths about bloating, water retention and side effects.  They are way overblown for most responsible users.  There are some signficiant benefits to females who choose to use this product that is not for men only.  Below you will find some older studies with links for further research.

What’s your stance on creatine for women?